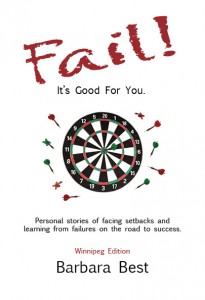 So much of what we do, or don’t do, is motivated by our fear of failure. By failure I don’t necessarily mean a grand disaster, but more so the small rejections and flops. Sometimes we go to great lengths to avoid the shame of failing.  But why? Is it really all that bad? Is the result of our failing every truly awful?

All of us have faced rejection and failure. Yet, somehow, we all feel alone in our post failure misery. We shouldn’t, because everyone has been there: even the most successful people.

In ‘Fail! It’s Good For You’ we’re going to hear from some successful people many of us admire and find out about their missteps and how they handled them.

This book came about as a response to my mid-life career change. I found the rejection involved hard to deal with and took solace in stories of other people’s rocky roads to success.

I will be donating 25% of my net proceeds from the book to scholarships for women starting over in a new career.

We’re going to feature a few of the book’s contributors each week, so check back weekly.

Lita Fontaine is of Dakota, Anishinaabe, and Metis descent. Fontaine is a Mother, sister, Art Educator and Visual Artist. Her mother Rose Anne Fontaine’s band affiliation is Long Plain, her father’s, Sagkeeng First Nation. Fontaine was born in Portage la Prairie, Manitoba, and grew up in Winnipeg’s North End. Ever since childhood, Fontaine always enjoyed the act of creation like drawing, building, sewing and collecting recyclables.

During Fontaine’s late twenties, the creative urge to become an artist became quite strong. Being a single mother at the time she decided to return to school and enrolled in the University of Manitoba’s School of Art in the Diploma program where she developed and hone her skills and abilities in drawing and black and white photography. She later pursued an higher education at the University of Regina, Visual Arts Faculty where she attained a Master of Fine Arts, (M.F.A.) specializing in Inter-media and, as some may know as Mixed–media.

Fontaine has exhibited her art in several solo and group exhibitions and her work can be found on murals in Winnipeg, Manitoba and in personal art collections.

Fontaine’s current occupation as Artist in Residence is to collaborate with teachers, integrating art into the school division’s curricula. In the past, Fontaine has also taught Foundation Drawing and Aboriginal Art History at the University of Manitoba’s School of Art as a Sessional Instructor. Even with a busy schedule, Fontaine’s focus is her own professional art practice.

Fontaine’s practice is predominately studio based and her methodology in the area of arts education is hands on, where creative processes play an integral role in learning.  Fontaine believes the visual arts acts as a catharsis that nourishes emotional, physical, mental, and spiritual growth while making art.

Gerry Atwell – “Born and raised in Winnipeg, Gerry Atwell is a multi – disciplinary artist who has worked professionally in Music, Theatre, Visual Arts, Film, Radio and Television. Gerry has composed music and performed narration for Dance performances by choreographers suc h as Sharon Moore and Casimiro Nhussi and has served on the board of Winnipeg’s NAfro Dance Company. As a musician, Gerry has won a Juno Award with the band Eagle & Hawk. As a writer, his award winning teleplay The Hands of Ida was directed for television by Guy Maddin, winning a Blizzard award and a Gemini nomination.” – dtrc.ca

Al Simmons – “He’s a musician! He’s an inventor! He’s a nut!  He’s been called the Thomas Edison of entertainers, a wizard of one-liners and a lightning bolt of lunacy. His astounding gadgets, preposterous songs, impeccable comic timing and kooky take on classic vaudeville have thrilled and entertained fans of all ages for 4½ decades. Juno Award winner Al Simmons is a creative genius whose highly original performances of profound wackiness and of off-the-wall inventions have taken the arts of Music and Comedy to unparalleled heights of hilarity. Young or old, you cannot fail to appreciate this man’s frenetic stage antics and mind-boggling lovableness.” —alsimmons.com